Jim
April 8, 2017
Uncategorized
This poll by Gallop indicates that people have the most trust in institutions that are primarily staffed by white people.  The common perception of the military is that it is made up of rednecks who can’t get a regular job in the business economy.  Of course, the military is not 100% rednecks, but they constitute a higher percentage than in most of the other categories in the poll.  Small business probably has a pretty good cross section of the population.  A number of minorities and immigrants work in the small business economy.  But police, like the military, is disproportionately white.  This is one of the complaints of the “black lives matter” movement.  I find it surprising that police rank so high.
I also find it surprising that predominately Jewish institutions rank so low.  The media, TV and print journalism, a profession dominated by Jews both in TV and print, rank near the bottom.  Jews are disproportionately represented in politics, particularly in the Senate, which ranks at the bottom.  Lawyers don’t fare much better, as illustrated by the relatively low ranking of the Supreme Court (half Jewish) and the legal system.
I am not sure what to make of this.  It probably doesn’t mean much, but it does at least illustrate the enormous recovery of prestige by the military.  As a Vietnam veteran I came home to country that was on the verge of hating everything about the military.  The military has gone from the bottom of the chart of the top in forty years.  The 9/11 attacks definitely have something to do with the change, as does the abolition of the draft.  As a formerly hated veteran, I am suspicious of the ranking.  I think civilians may say they honor the military, because they don’t want to serve.  It’s easier to pay compliments to soldiers and veterans than it is to go fight.  Civilians are happy someone else is doing it.  But it’s great for the people who are fighting today’s wars.
The poll results: 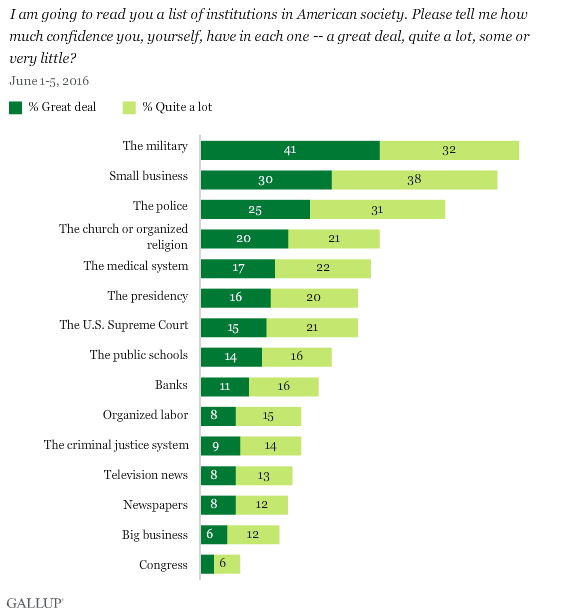