Jim
December 28, 2012
Uncategorized
Just a note to remember our wonderful yellow lab, Dixie Lee, who lived with us for about 12 years, and who died yesterday.  She was a good dog who did her duty up until the end.  The day before she died, she got the morning papers and brought them in, she went with us on a shopping trip, and around midnight of her last night, she went out and did "her business" when I asked her to.  She had probably not had an accident in the house for years, and continued that up until the end. 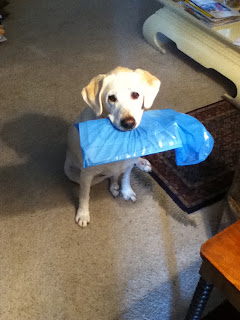 Most of all, she was entertaining.  She was not very obedient or affectionate, but she loved us in her way.  She would not cuddle, but was usually around, maybe just a few feet away.  And although she would not come immediately when we called, she would eventually come.  She wanted to be with us, but only after she had sniffed whatever it was that she was interested in.  She always brought in the morning papers, even when they were covered by snow, but only after she had checked out the front lawn to see what had happened overnight.  She was always ready to go with us, where ever we went.